The bloody-mindedness followed hard on the heels of that high-speed experience: opinion today is that we road testers should be speaking less about big diesel SUVs than we once did, because they’re somehow less respectable, yet right now their environmental credentials are better than they have ever been.

This 282bhp 3.0 V6-powered car is now as clean, exhaust-wise, as a petrol vehicle of equivalent power and performance. Yet it produces less CO2 (just 173g/km) than many 2.0-litre petrol cars. It has a smart 4Motion 4×4 system (ideal for the semi-rural dweller, of which Autocar has several) and, in any guise, let alone the R-Line Tech we finished up with, has plenty of equipment. Our example, even with £9650 worth of extras, will look very affordable to many against a similarly equipped, similarly sized Bentley Bentayga. 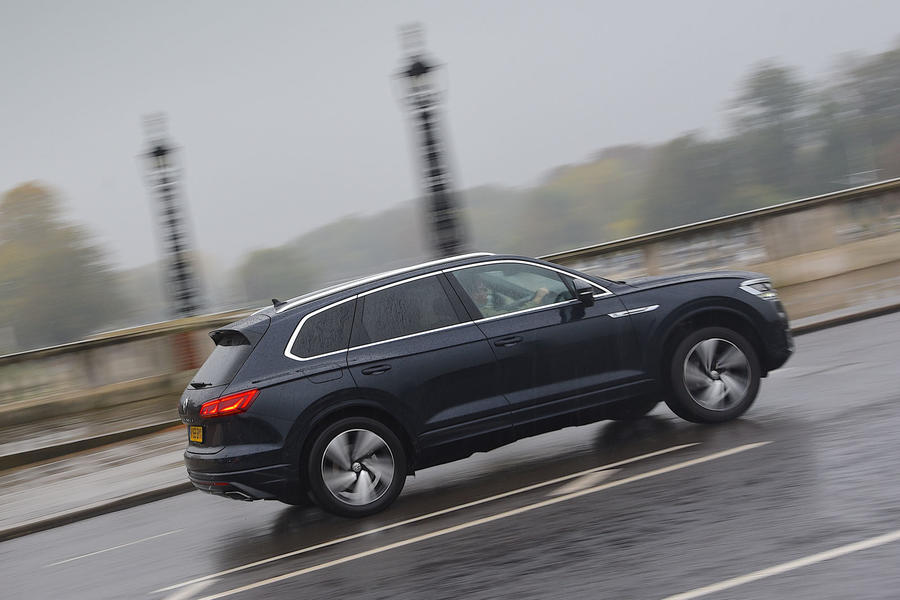 And it’s off to a flying start. The car arrived eight weeks ago yet the mileage is already close to 4000 because it’s recognised as one of those cars that comfortably conveys multiples of people, luggage and camera kit long distances at the drop of a hat, and it has the instantly recognisable quality of durability that convinces it’ll be up to the job. The basic price of a Touareg R-Line Tech, about the size of a standard Range Rover, is £58,335, which means it undercuts the British offering by at least £20,000. Even our kitted-up version – complete with air suspension and electronic antiroll likely to be little different from a Bentayga’s – still looks great value.

Most ancillary functions are controlled via a 15in touchscreen that, given the plethora of operations it controls, is pretty easy to master – even if it took two good searches and a trip to the handbook to turn off the heated steering wheel. Even this thoughtfully designed system shows that when a car has so many functions, controlling everything by touchscreen is more a convenience for the car’s builder than its buyer.

The Touareg has the unusual quality of modesty in its make-up. Usually size, price and depth of equipment are associated with a pursuit of prestige, but this Touareg is pleasantly free of such a goal. It’s a well-made car but there’s no excess of showiness beyond a somewhat naively styled gap-toothed grille. Otherwise, it’s no more prestigious than VW’s smaller SUVs costing half the money, and we’re fine with that.

What’s warming is the Touareg’s big-car comfort, the precision of its major controls, the excellence of its instruments and graphics and its thoughtful design touches (such as a rear luggage blind that lifts out of the way when you open the tailgate), all created for use rather than ornament.

The on-road ride quality is outstanding: all-independent suspension absorbs bumps quietly, with great wheel control and far less of the high-amplitude body movement that affects other big 4x4s. Our optioned car is self-levelled, of course, so there’s little difference in ride quality whether it’s carrying just you or four adults in its nicely shaped seats. A fifth occupant in the centre spoils things in the rear, though.