The electric crossover-style SUV will be a big part of the VW ID brand’s range offensive in the US, as well as in Europe. Previous spyshots gave us a glimpse of the production model next to its hatchback sibling.

The bodywork similarities of the two prototypes suggest the ID 4 will be closely linked to the ID 3 it is testing alongside, albeit slightly larger and sporting more evident SUV design cues. 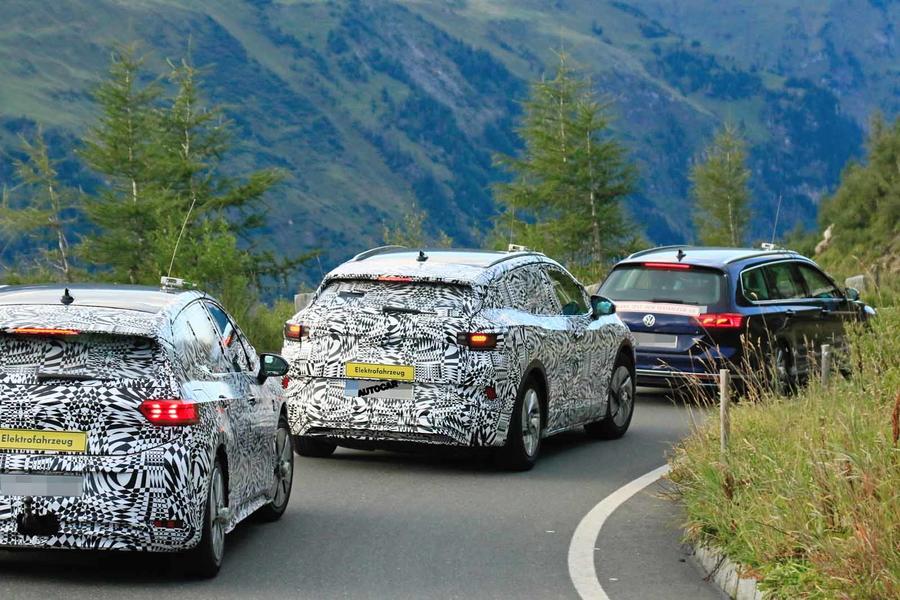 Although VW was giving away little information about the car at Frankfurt, to keep the focus on the company rebranding and the launch of the production ID 3, the Kia e-Niro rival is set to go into production in the middle next year.

Two production versions of the ID Crozz will be offered: a coupé-SUV in the vein of the original concept and this straight SUV model with a more conventional roofline and tailgate design. We can also see it has conventional rear doors, ditching the sliding items of the 2017 car. It’s not yet clear if the coupé variant will also adopt this approach, but it’s likely.

The ID 4 will be built in Europe, the US and China, cementing its status as a truly global model and a crucial kingpin of the brand’s rapid EV rollout.

“As early as 2020, we aim to sell 100,000 all-electric Volkswagens [per year],” said VW Group chairman Herbert Diess at the Crozz concept’s 2017 unveiling. “But this is just the beginning. By 2025, annual sales could increase tenfold to one million vehicles.”

The ID 4 aims to combine the dynamic lines of a modern-day sports car with the all-terrain capability of a dedicated off-roader. It’s said to offer interior space on a par with the Tiguan Allspace, a new long-wheelbase version of VW’s best-selling SUV model.

The ID Crozz concept is 4625mm long, 1891mm wide and 1609mm tall, putting it in between the five-seat Tiguan and seven-seat Tiguan Allspace in terms of dimensions. The wheelbase is 2773mm.

The MEB-based ID Crozz features two electric motors – one mounted within the front axle, and one at the rear – powered by an 83kWh lithium ion battery housed within the floor structure. The front electric motor sends its 101bhp and 103lb ft to the front wheels. The rear unit delivers 201bhp and 228lb ft to the rear wheels, giving the car a combined output of 302bhp and 332lb ft of torque.