By and large, this is a good, responsive motor, developing 151lb ft from 1750rpm and pulling with the lightness for which downsized triples are known. It’s certainly louder than it is in the 208, though (perhaps by design, because Opel sees itself as a more sporting brand), and you’re exposed to plenty of transmission whine with the manual. Neither element threatens to make the Corsa feel uncouth, because rolling refinement is reasonable for the class and neither sound is outright unpleasant. But it’s an indication that the new Corsa maybe still lacks some polish. It’s a theme that continues inside. We needn’t dwell on this, because more interesting is the way the Corsa drives, but there are swathes of cheaper plastics and some small irritations, such as the play in the headrest mounts of our test car. The standard digital instrument display is also installed as though it were an afterthought, and the high-quality but rock-hard plastic used for the gearknob just feels wrong.

Two strong points, though, are the driving position, with its 30mm-lower hip point and generous reach in the steering column, and the fact that Vauxhall has used plenty of intuitively grouped physical switchgear for the PSA-sourced touchscreen infotainment system and climate controls. It doesn’t take long to feel at home, which will matter to the Corsa’s largely non-enthusiast owners. And so to the driving. Opel-Vauxhall’s engineers will have been constrained in their thinking, but equally it won’t have been lost on them that this Corsa represents an opportunity to help redefine the brand’s dynamic character. And there have in the past been disappointments – often ones badged VXR. Fortunately, the new car is much improved, although all the driving controls are laced with an unconvincing lightness that requires some acclimatisation before the driving experience begins to feel sufficiently natural. As with so many cars in this class, the steering is generally lacking in feel and unsurprisingly feels designed for city centres rather than open roads, which is fair cop.

However, the same steering is accurate and decently crisp at speed and operates without the nervousness of the 208’s setup. It’s also paired with impressively little body roll. The sensation of stability is not unlike that in the Audi A1 Sportback, in fact, although like that car, the new Corsa doesn’t really do much to entertain beyond its flat-cornering-with-very-good-grip routine.

Vauxhall also says wheel control is improved to the extent that it has been able to wind back the chassis-stability electronics considerably, and you do notice this. The Corsa moves in a quick and clean if faintly antiseptic fashion, and you can’t help but notice it’s well balanced for a supermini.     As goes ride quality, the Corsa proved surprisingly good at rounding off the harder edges of the road surface on 16in wheels. Better even, perhaps, than its plush 208 cousin, though we’ll need to drive them both on British roads to know for sure. Certainly, for a relatively firm, sporting setup, it doesn’t punish its occupants, although the rear torsion beam and short wheelbase can’t perform miracles. For the class, it’s good enough. 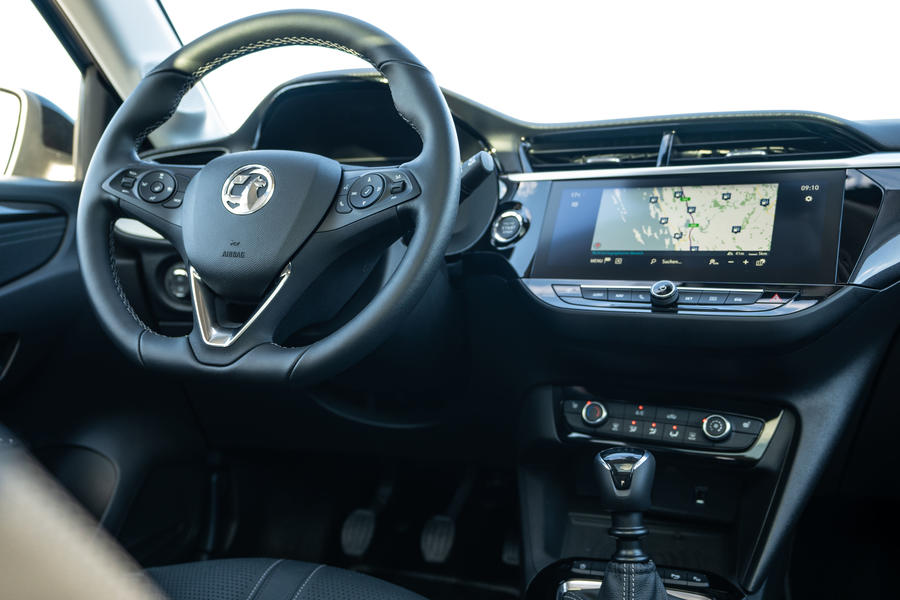