The penalties in weight and torsional rigidity that you normally get when chopping the roof off a car have been kept to a barely noticeable minimum in the Speedster. In fairness, we were driving in borderline Baltic conditions and hardly pushing for tenths of a second, but even so, the 911 felt every bit as engaging and special as a GT3. There’s the same gloriously slick steering that imparts all the information you’ll ever need, and the same front end bite that inspires huge confidence to lean on the available grip – the rear steer helps here, rotating the car subtly to get you pointing into the corner.

Our car was fitted with Dunlop Sport Maxx rubber rather than the Michelin Cup 2s, but even so, this tyre is far better suited to warm Tarmac than the frigid surface on offer here. Yet, despite all the standing water, the Speedster still found grip; the four-wheel steer delivering uncanny grip and agility and that out-rigger engine’s location helping to find traction where a more fashionable arrangement of masses would struggle. A similarly shod Boxster Spyder that was also driven on the day was far more skittish, slipping into understeer or spiking into oversteer where the far more powerful 911 kept its composure.

Of course, much of the confidence this car inspires comes down to communication; there’s a constant flow of information through your fingertips and the seat of your pants that lets you know exactly what’s going on and just how hard you can push. Few two-wheel drive cars with this focus and performance encourage and reward so much in such tricky conditions, the Porsche constantly allowing you to step up to the very limit of grip. And if you push really hard the electronic systems reveal witchcraft levels of calibration, giving you just enough leeway to feel you’re on top of things, but always being there to gather it up if you get greedy.

The damping is supreme too, the slightly stiff-legged low speed ride melts away as you pile on the miles per hour. Over Northumberland’s smoothly surfaced but bumpy roads, the 911 displays an uncanny blend of unshakable control and just enough comfort. Sport mode is too stiff for the road, but, in the adaptive dampers’ normal mode, sharp crests and vicious compressions are simply shrugged off, the 911 never once feeling like its composure is being tested.

Of course you can get all of these sensations in a GT3 Touring, but what that doesn’t give you is that totally sensory immersion of being so close to the elements. Of course the engine is louder, but you’re also more exposed to the sound from the tyres as they splash through puddles or throw up gravel, as well as all the smell from both the surroundings and the car itself (warm exhaust and baked brakes anyone? Mmmm). So much does the open air experience add to the 911s appeal that, despite the extreme conditions, the roof of the Speedster was stowed for almost the entirety of our test route. You’ve heard of those sensory deprivation tanks, yes? Well this 911 is the exact opposite – a total sensory overload machine. 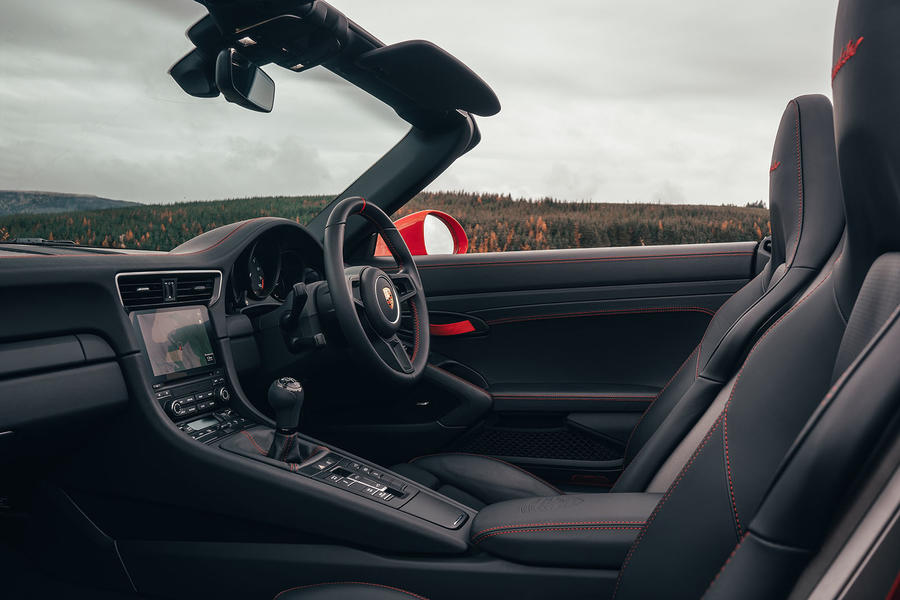