All change: we’ve swapped a petrol fastback for a diesel estate. Good move or not? – 4th December 2019

Life with the estate version of Peugeot’s smart 508 is passing as effortlessly as it was in the GT fastback. This is a smooth, sophisticated motor car. I was about to add ‘for a Peugeot’ to that sentence, but perhaps in 2019 I really shouldn’t.

The change of shape has naturally brought a variation in price and spec, too. Let’s start with the engine. From 1.6-litre inline four-cylinder turbocharged petrol, we’ve switched to 1.5-litre inline four turbocharged diesel. That results in a notable drop in power: 225bhp versus a modest 130bhp. But naturally what we’ve lost in that regard we’ve gained in torque: 221lb ft at 2750rpm versus 300lb ft at 1750rpm.

Still, you can’t help but notice the loss in outright performance. The petrol GT has a top speed of 155mph and a pert 0-62mph time of 7.3sec. The diesel SW runs out of puff at 129mph and takes an unremarkable 10.1sec to do the 0-62mph. 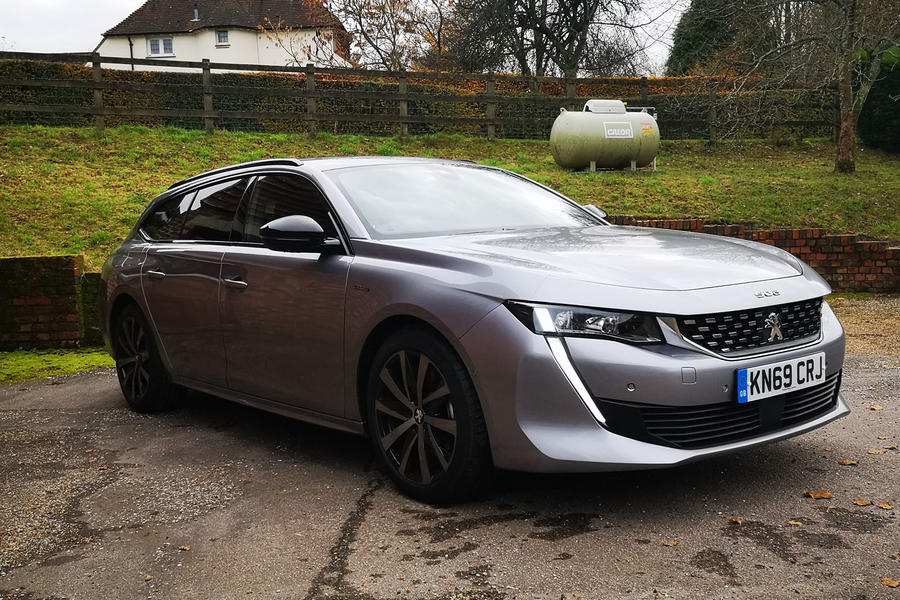 There’s little in it on dimensions. On the same 2793mm wheelbase, the estate is identical in width, 17mm taller and (inevitably) 28mm longer. At 1500kg, the kerb weight is only up by 80kg on the saloon and, of course, you gain in luggage capacity, but not by a huge amount given the fastback’s generosity in this regard despite its svelte rear lines. Seats up, the estate gives you 530 litres of boot space versus 487, stretching to 1780 litres versus 1537 with the seats down. Both have proven more than up to the task of daily family life, but for special trips – picking up an office desk with two small children in the car – the estate fell well short. Most would, to be fair. We reverted to the packaging marvel that is our trusty 10-year-old Ford S-Max for that one.

The driving comparison so far? In honesty, despite the spec differences, there’s little to choose between the variants. Refinement levels remain admirably high, the diesel delivering what power it has with little fuss or noise. Yes, there’s a diesel rattle on start-up from cold, but fine soundproofing ensures it’s remote, and once the engine is warm, it settles down anyway. At a cruise, all is quiet.

Primary ride on the 18in wheels (the petrol fastback rode on 19in) is untroubled and, as previously, the eight-speed automatic gearbox is smooth and makes progress easy.