That there are faux imprints of a dirt bike tyre moulded into the head of the load bay and that the Jeep factory’s zipcode (in Toledo, Ohio) is stamped just inside the tailgate might seem twee. But don’t be in doubt about how senior Jeep people use these vehicles. The tailgate opening hatch measures 1270mm across because that will accommodate the widest snowmobile you can buy. “And that’s the one I have,” says Langhals.

Snowmobiles, dirt bikes, mountain bikes, fishing gear, camping gear, outdoor stuff, pulling boats: that’s the point of the Gladiator. Given how frequently Jeeps are used, abused and modified in the US (“let’s be honest: Wranglers stay stock for about five minutes”), it’s about time Jeep had a pick-up again.

It made one as long ago as 1947 and first introduced the Gladiator name in 1962. A pick-up stayed on sale, latterly as the Jeep Comanche, which looks like an aftermarket hack job of an XJ-series Cherokee, until 1992. But since then, there hasn’t been a pick-up Jeep, which seems like an odd oversight given the kind of use Wranglers get in a country where pick-ups are some of the best-selling, and certainly the most profitable, vehicles.

The Gladiator isn’t a workhorse or commercial vehicle, though. It’s a fun wagon. Its payload is 620kg rather than 1000kg-plus – despite having a rear axle from a Dodge Ram – and its towing weight is 2721kg. 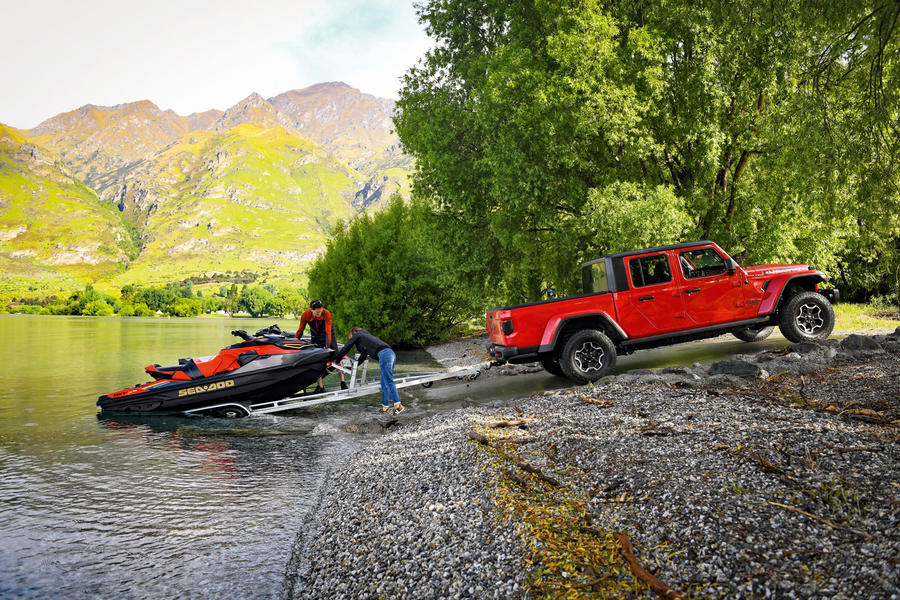 It’s what Americans consider a mid-size and what we think of as a big truck, at around 5.5m, the length of a Volkswagen Amarok and Ford Ranger. Think of it as a Ranger Raptor rival if it comes to the UK (still in question), where it would have a 3.0 diesel. In the US, and here in New Zealand, there’s a 285bhp 3.6 V6 mated to an eight-speed automatic. EVs and plug-in hybrids are coming, Jeep president Christian Meunier assures us. Given the high current fleet CO2 average of Jeep owner Fiat Chrysler Automobiles, they’ll have to. But with that come advantages, too. Think of heading softly down a track, roof down, making no noise to alarm the wildlife. Think of setting up camp and having the electrical power you brought with you. Think of the advantage of being able to dole out precisely how much torque each wheel’s grip can handle, with instant response. Meunier says the firm will use electrical power to make Jeeps “more capable than ever”.

Personally, I’d love to see the return of a forward control Jeep, too, but flat windscreens are out these days, because while they can be made aerodynamically efficient (and while with a pure-electric powertrain that wouldn’t matter so much anyway), pedestrians don’t respond well to impacts with them.

Like all big pick-ups, the Gladiator is a separate-chassis off-roader. Here, though, that chassis is very obviously, given the size and shape of the front half, from a Jeep Wrangler – another Langhals design.