As we’ve found with other versions of the refreshed GLC, the general updates ensure the interior remains a comfortable and relaxing place to spend time. The controls are well laid out, visibility is good (aided by the all-round cameras and sensors) and it all feels as premium as you’d expect from a Mercedes SUV of this size.

Notably, the large 10.3in touchscreen is clear and the MBUX operating system is intuitive and easy to use. That’s helped by your ability to control it via the touchscreen, steering wheel-mounted controls, a trackpad and surprisingly effective voice control.

Initial impressions of the mild-hybrid powertrain are good too. The two motors are well integrated and the electric unit does a good job of smoothing out the acceleration of the combustion engine at low speeds. On the motorway, the engine-off coasting is virtually seamless when it cuts in, enabling progress with a calm comfort that befits the interior.

The downside of this calm demeanour is that the powertrain isn’t particularly dynamic or engaging and on occasion not the most responsive. With the GLC’s relative heft, the shortage of torque compared with the 300d diesel can be felt.

And while the mild-hybridisation does aid fuel economy and emissions, the 300 still isn’t particularly economical, with an official fuel economy starting from 29.4mpg on the WLTP cycle. 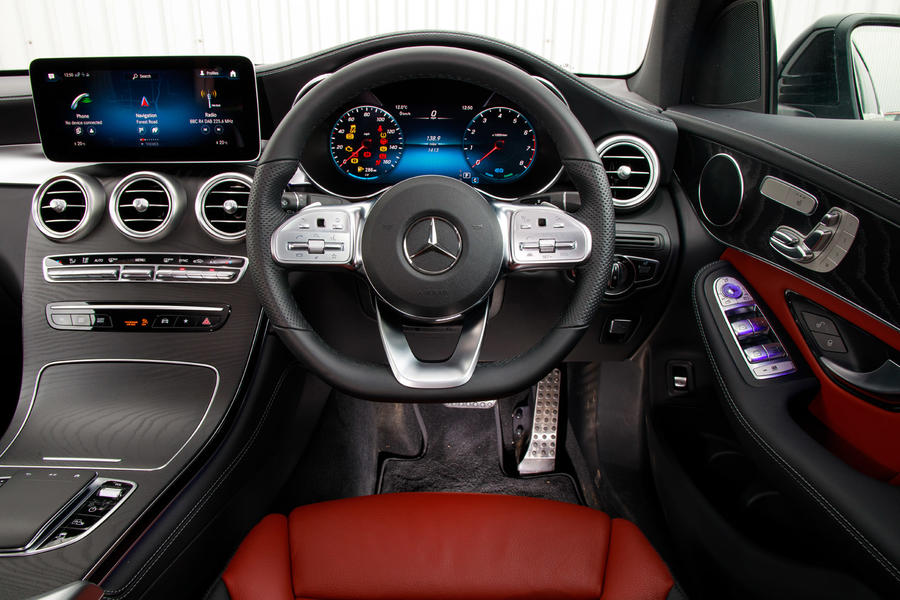 Should I buy one?

The refreshments made to the GLC continue to make it a compelling choice for those seeking a premium SUV of this size. Whether you should opt for this 300 version likely depends on how and where you’re planning to use it.

If your time is likely to be spent on longer journeys on motorways and A-roads (and depending on your view on buying a diesel), the similarly priced 300d offers better performance at a lower cost. And if you’re really seeking to make a step into the world of electrification, it would be worth looking at the plug-in hybrid 300e.

On top of that, we still question why you would pay a premium for the Coupé bodystyle over the more practical and spacious regular SUV.