It’s parked among an array of tanks, Abbott self-propelled guns, armoured personnel carriers and even a mighty Ural-4320 6×6 diesel, currently for sale and with a camper conversion in the back. Another of the vehicles, an Alvis Stormer purchased from Northern Ireland, still has elements of its Starstreak missile system attached to it.

Mead began collecting tanks 30 years ago when he bought a couple costing £3600 apiece. He was a butcher at the time but the fact that you could buy a barely used tank, which cost millions of pounds new, for just a few thousand intrigued him. He could only see their prices going one way and sure enough they have, as private collectors from all over the world pile in.

He has 180 tanks, mostly British, on his 100-acre site. Four of them are Chieftains, for sale at prices ranging from £18,000 to £50,000. Buying a tank is straightforward enough but Mead has to be careful who he sells to. “I can go to prison if I sell to the wrong country,” he says.

It’s not only collectors who value Mead’s tanks. He’s just back from providing some of them to the British Army for its annual demonstration of firepower. They included some of his Russian tanks and a Mitsubishi L200 pick-up he’s converted into a rebel mobile rocket launcher.

“They like to have alien vehicles to target so they can practise vehicle recognition and tell friend from foe on the battlefield,” he says. 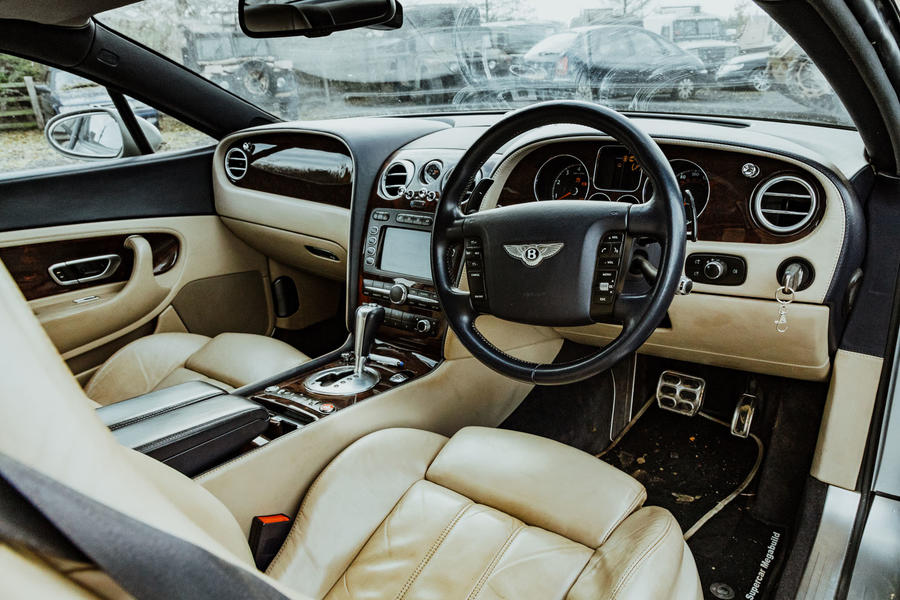 What would the army make of Mead’s Bentley GT W12? The ‘Dakarinspired off-roader’ was created by TV’s Supercar Megabuild team, who fitted it with raised and stiffened suspension, extended wheelarches, crash bars and a rear screen-mounted spare wheel, before painting it a drab shade of green. It was sold at auction in 2017 and now resides at Tanks-Alot, sporting an undignified advertising hoarding on its roof.

Bizarrely, given its outrageous exterior, its pure GT inside, right down to its magnolia hide. It fires up and settles to a hushed tickover but requires a hefty prod of the accelerator to coax it around the yard. It has lost a lot of its original tightness and warning lights blaze from the instrument binnacle but its value as a promotional tool rather, than a rival to the Bentayga, is obvious.

With my wellies heavy with mud, it’s time to stop playing soldiers. In any case, Mead has a T54 and an Alvis Saladin with deactivated 76mm gun to sell. As I leave, the air explodes with a cackle of curses from some of the 34 parrots I’ve only just noticed. “They’re from broken homes,” says Mead, as one of them tells me not to darken the front step again. It wants to be careful I don’t come back in my Chieftain.