Where did the summer go? It’s a Sunday morning in October. The rain is hammering down outside. I’m not complaining. This is my favourite mountain-biking weather. It’s also my favourite time to be smug about driving an SUV.

After collating a sack full of gloves, pads, helmets, spare clothes and the blandest cereal bars that even hamsters would refuse, it’s time to chuck my cycling kit into the CR-V Hybrid. Handy levers in the boot make it easy to fold the seats down from the rear, opening up a vast and flat load space.

Those familiar with quick-release mechanisms will know how easy it is to take modern bikes apart. I whip the front wheel off, lower the saddle and within moments my mud-plugging steed is laying flat in the back of the car. The lack of boot load lip here makes the whole process an absolute doddle.

Along the leafy lanes of Surrey, the heated seats, heated mirrors and heated rear windscreen keep me dry on the inside and my essential bits of glass clear on the outside. Most cyclist types have more energy on a Sunday morning than I do after my fourth coffee on an Autocar video shoot. So by the time I arrive at 10.30am at one of the south-east’s mountain-biking hotspots, the muddy car park has been churned up by the vast array of Volkswagen vans and Surrey-spec Land Rover Defenders that have been there since well before 9am. The remaining parking spots are like that football pitch at school on which the PE teacher forced you to play even though the ball couldn’t roll because the ground was effectively sinking sand.

Helpfully, the specification of CR-V Hybrid that I’m running includes Honda’s clever all-wheel drive system. This pushes power to the wheel that has the most grip. As I slowly mooch through the standing puddles, the Honda serenely pads along the uneven ground in EV mode like a wild cat silently stalking its prey. 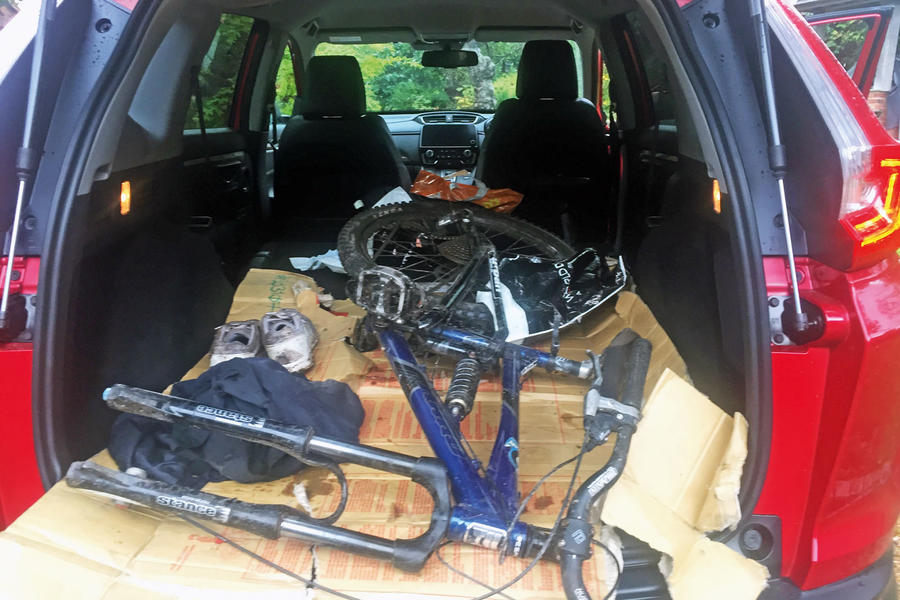 Honda kindly lent me a two-wheel drive version to have a go in for a couple of weeks recently. It’s perhaps obvious to point out the extra traction in scenarios like this squelchy car park, but the comparison is more intriguing here than in other vehicles due to this car’s hybrid powertrain. The instant torque of the electric motors means that you put a good lump of power through the wheels when taking off from a standstill. On a wet and slippery day, such as this drenched Sunday, you would notice that it’s easier to lose traction in the 2WD version.

That being said, most of the time, you would not spot the difference because the CR-V Hybrid is not the kind of car you’re hustling into corners, which would maybe reveal a weight or traction difference if you did. During my time in it, the 2WD variant did, however, display a better fuel economy than its AWD sibling so I suspect your choice of drivetrain would depend on your intended use. But I can vouch for the all-wheel-drive system if you spend winters taking your kids or yourself to dirt-filled locations.