You have to see a Raptor’s bare chassis to fully appreciate just what Ford did to it: how the front end is stiffened to withstand Baja-style rally-raid impacts, while the rear end has been completely redesigned and fabricated to accommodate coil springs that have a lighter unsprung weight and far quicker responses than the leaf springs that Rangers, like most other pick-ups, otherwise come with.

Forgive me if I go off on a dive into these. The most notable part of them, if I understand it right, is bypass valves in the middle of the dampers’ travel. So there’s firm initial damping, then quite a soft phase in which the valves are letting oil bypass the plunger, so it’s riding easily and comfortably, and is apparently a phase you drive in quite often. Then the damping force ramps up again towards the end of travel, after the piston has moved beyond the bypass valves. Ultimately, it’s a bit like a soft-close drawer – easy travelling but shove it as hard as you like and it’ll never slam shut.

There are other impressive chassis things too. Ground clearance is up 51mm to 283mm. The approach angle is a terrific 32.5deg, the departure angle is 24deg (pickups have long rear ends) and the breakover angle is 24deg. Wade depth is a fairly astonishing 850mm. There are bespoke BF Goodrich KO2 tyres on a much wider track, with a Watt’s linkage at the back to limit sway The result is a car that Johnson says is like a “four-wheeled dirt bike” and two things strike me in my experience of the Raptor so far. For one, Johnson’s not wrong. For two, like trying to use all of a Ferrari 488’s performance, you have to go hunting for the right location to do it. 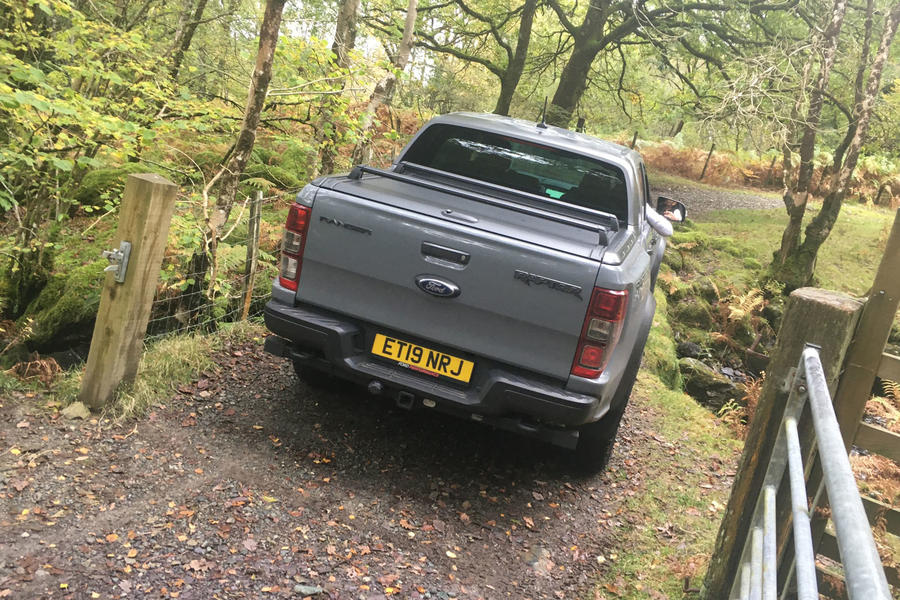 Like with supercars, some people understand this, and some don’t. Some of those who don’t get it think that the Raptor should have a more meaty engine than the twin-turbocharged 210bhp diesel that leaves it with a 0-62mph time of 10.5sec.

Actually, some of those who do understand the car think that, too. But the costs are already prohibitive and nobody buys pick-ups, Ford argues, with those kinds of engine in Europe. So there we are.

The other issue is the price. This is a £47,874 offroader and, thanks to coil springs, its load capacity has reduced from over a tonne to just 620kg, which means for tax purposes it should be treated as a car rather than a van. That makes a VAT reclaim harder, while monthly benefit-in-kind for a 20/40% taxpayer is not £57/£114 as it would be on a Ranger Wildtrak but £295/£590. Every month. The towing capacity has dropped from other Rangers too, from 3500kg to 2500kg.