Looking to garner an even greater slice of the premium small SUV market against popular rivals such as Audi Q2 and BMW X2, Mercedes plans to offer the new GLA with the choice of three different powertrains: petrol, diesel and petrol-electric plug-in hybrid.

We’re still a few weeks away from seeing the new GLA, which will be shown by Mercedes boss Ola Källenius in an online presentation. But ahead of that event, we were given the chance to sample a near-production prototype in a run around an off-road obstacle course at Mercedes’ Rastatt plant. The model is currently undergoing pilot production here, ahead of the first UK cars arriving in the second quarter of 2020.

Initial impressions back up what earlier scoop images of the new GLA suggested: that it has been given more upright styling in a bid to provide it with greater interior accommodation, added versatility and a slightly larger boot.

Mercedes confirms the new model is almost 20mm shorter than its 4424mm-long predecessor. Despite this, the wheelbase has been extended by 30mm to 2729mm, endowing it with greater rear leg room and the scope for an adjustable rear seat similar to that already offered as an option in the B-Class and GLB. 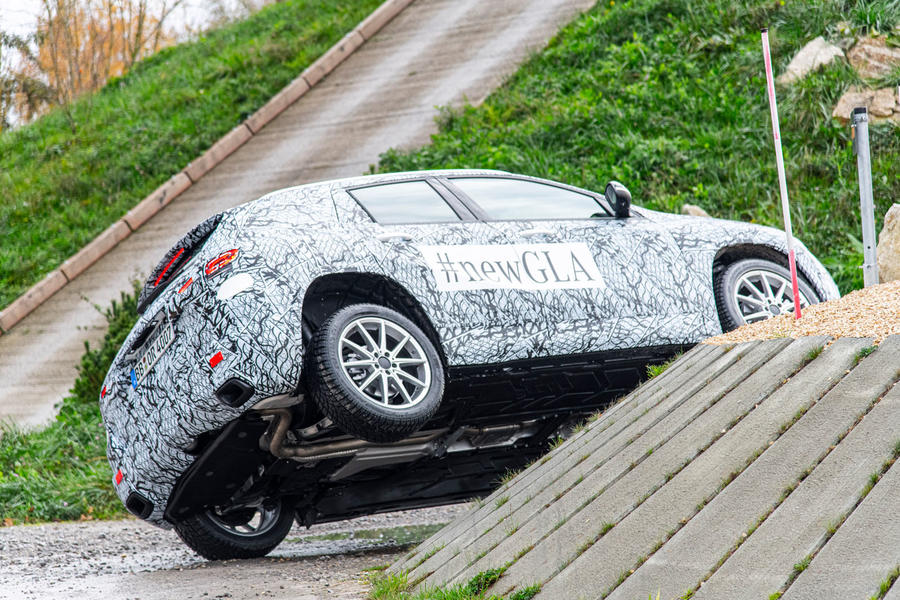 The biggest change in overall dimensions, however, comes with the height. It has been increased by almost 100mm, giving the GLA less of a hatchback-on-stills optic in favour of a more dedicated crossover appearance. It also helps to provide greater head room, especially in the rear, which is now considerably roomier than before.

With our time in the new GLA limited to an off-road course at low speeds, we can’t tell you much about its character just yet. What we can confirm, though, is that it’s capable of going places most prospective owners will never consider taking it.

As with other new Mercedes compact models, its optional 4Matic four-wheel drive system has been re-engineered to offer fully variable apportioning of power to either the front or rear wheels. Traction on slippery surfaces is obviously a key strength, allowing it to climb and descend tricky obstacles without much trouble at all.

Despite Mercedes’ insistence on showcasing the GLA’s off-road ability, though, it will only be offered with standard bodywork. A more rugged variant in the style of the company’s All-Terrain models isn’t on the cards, according to Mercedes representative Markus Nast. He says the new model, which goes under the internal codename H247, will be available exclusively with a standard or, in combination with an AMG bodykit, lowered ride height.