Whichever way you prefer to plan your journeys, it will be a while before any electric GT can beat the GT 63 S for ease of use. For straightforward ownership appeal, though, it’s the Polestar that you’d choose out of this trio, I reckon. It’s nowhere near as practical as the Mercedes, with 2+2 seating that would only ever make it a four-seater with younger kids in the second row, and even then over shorter trips only. The layout of the car’s power management electronics also means boot space is limited, and there’s no chance of loading longer items through into the cabin.

Even so, the Polestar’s is a much richer, more pleasant and more luxurious place for two to travel in than is either the AMG’s or the Porsche’s. Where the Taycan’s cabin is bigger on touchscreen technology but is ultimately more restrained and less ornate, and the AMG’s is more spacious and more overtly sporting, the Polestar’s is the bubble of sophisticated luxury that would make touring an easy pleasure. It juggles comfort, visibility, refinement, perceived quality and sense-of-occasion richness the best of the trio – and to drive, it has all the performance and handling appeal you’d expect in a biggish, expensive GT, although it doesn’t reset any preconceptions.

Which is precisely what the Taycan does do, and in all sorts of ways. You wonder, to begin with, how it is that a car that seems reasonably compact on the outside – that seats you so low, that has such a low scuttle and that seems so sporting on the face of things – can possibly weigh 2.3 tonnes. It simply doesn’t look like it does. It really doesn’t drive like it does, either, but that’s the upshot of being seated so low, in among the pouch cells that power the car’s twin electric motors rather than on top of them, I suppose. Not to mention simply the result of what happens when you give designers and engineers from Porsche, rather than from any other car maker, a clean-sheet brief to come up with the very best electric driver’s car imaginable. 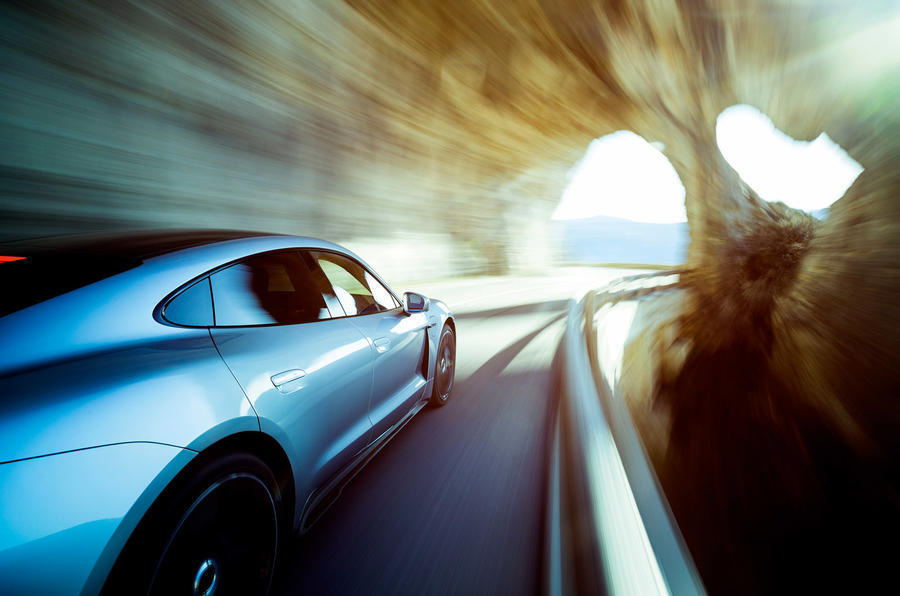 It takes something special to comprehensively out-punch a 630bhp AMG on outright performance and handling dynamism, but the Taycan Turbo S manages to do both on the road. Holy moly, this car is quick. When picking up from low speed, it feels even more breathtaking both for response and outright power than you dare expect it might. This is a car whose throttle you squeeze – and you do so carefully at first.

But unlike the other high-end electrically powered offerings that this embryonic market niche has seen hitherto, the Taycan handles every bit as well as it goes – and it stops very well indeed. It steers as well as any Porsche barring perhaps the best GT-department specials. It turns flat, grips hard and contains it body movements tightly, at least until you hit very high speeds. It also manages to deliver the cornering balance and handling poise you would sooner expect from a 1500kg, mid-engined sports car.