Unlike other X5s, the 45e offers driving modes specific to its powertrain type, so instead of the usual choice of Comfort, Individual and Eco Pro, you choose between Sport, Electric, Hybrid and Adaptive, with a Sport Individual mode hidden away in a sub-menu for those who want to mix and match steering, powertrain and suspension presets. Another button on the transmission tunnel allows you to select a separate Battery Hold mode, in which you can restore the state of charge in the battery to anything up to 100% during normal driving.

Adaptive mode is expected to be the one most drivers will default to. Assuming a route is set in the sat-nav system, it allows the car to manage the switching of its own powertrain from electric mode to combustion mode and back again in order to maximise fuel efficiency and, where possible, always deliver you to your destination just as the battery runs dry. Run in Electric and from a fully charged state and our testing suggests you’re more likely to get between 30 and 40 miles out of that battery than the 54 the new lab tests promise. Still, that’s a reasonable chunk more than you would get from most rivals.

Sport mode allows the car to take on a pretty convincing performance flavour, since it configures both engine and motor to run continually and to work together instantly. If you opt to manage the eight-speed gearbox yourself via the wheel-mounted gearshift paddles, throttle response is really good and initial acceleration strong when picking up from low engine speeds.

Above 4000rpm, however, it becomes pretty clear that the motor can do little more to assist the engine. And given that both power sources are driving onto a common gearbox input shaft and must therefore always operate at the same rotational speeds (and that motors still aren’t great at producing torque at high revs), it’s easy enough to work out why that might be.

The X5 xDrive 45e M Sport comes with adaptive air suspension, 20in alloy wheels and runflat tyres as standard, with BMW’s Integral Active four-wheel steering system as an option. Optional wheel size runs all the way to 22in if you have the M Sport Plus package – and, yes, as it happens, you can have the big rims without disqualifying the car from that low tax classification explained earlier.

Our test car had the optional 22in wheels and handled accurately and well on better surfaces, thanks to its medium-firm suspension. Both steering (which was slightly overly light) and body control over uneven roads left a little to be desired, however. The car’s ride was particularly busy, with lateral head toss at times, and under-damped at other times, particularly over bigger intrusions, when it tended to bound from one input to the next. Which just goes to proves that, while it can be very effectively masked for while, a two-and-a-half tonne kerbweight can’t be hidden forever in any modern passenger car. 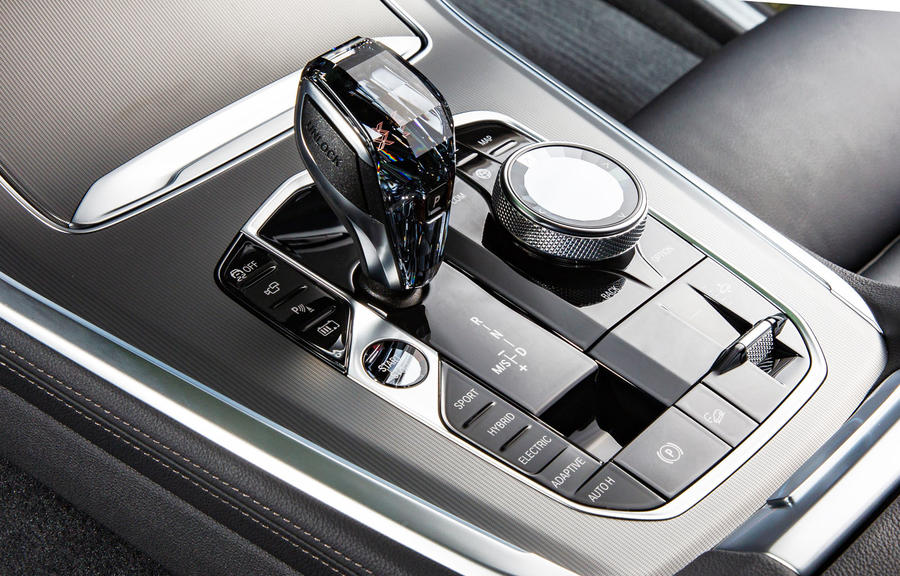