Inside, it’s a similar story to the exterior, with subtle updates to the standard A8 interior. Subjectively, there’s precious little room for improvement in what remains one of the best interiors in any car at any price. But with unique carbon fibre and aluminium trims the new S8 manages to provide added appeal.

In the right conditions, the big Audi is brutishly potent with earnest step-off qualities and unrelentingly urgent in-gear traits. The brawny engine is the undisputed star of the show, with the sort of sledgehammer performance to propel it from standstill to 62mph it in a scarcely believable 3.9sec.

The slick shifting eight-speed torque converter automatic gearbox and fast acting quattro four-wheel drive system also play an integral part in the explosive accelerative and top shelf cruising ability.  Together with the engine, they form an intoxicating combination that is further enhanced by a convincingly realistic synthesised soundtrack played over the speakers.

Yet, as effective as it is under full load in sport mode, the S8’s engine is also compellingly smooth on more measured throttle inputs in an altogether more relaxed Comfort+ mode. In city driving, it proves wonderfully flexible even in Eco mode, where the cylinder on demand system closes down one bank of cylinders, essentially turning the engine into a four-cylinder unit for brief periods.

The most remarkable thing about the new S8, however, is the added agility brought by the adoption of Audi’s Predictive Active Suspension and Dynamic All-Wheel Steering system. As well as varying the assistance acting on the steering of the front wheels, it adds a steering function to the rear wheels, which turn in the opposite direction to the front wheels at low speeds and in the same direction at higher speeds.

The upshot is a new found level of communication and response. Despite its generous dimensions, you can place the new S8 with added precision and confidence in any given driving situation. On more challenging roads, there’s a welcome liveliness and neutral character to the big Audi that was always found wanting in its predecessor. With the predictive function to the suspension able to alter the characteristics of the damping up to 18 times per second and an ability to lean into corners in a manner similar to motorcycle, the new S8 is more composed and fluid. The trademark directional stability has also been improved, bringing added stability at higher speeds.

An added advantage of the adoption of rear wheel steer is a reduction in the turning circle at low speeds, a development that facilitates manoeuvring during parking and low speed urban driving.  Primary ride quality is also improved. However, the S8 is still unsettled by larger transverse ruts and ridges. 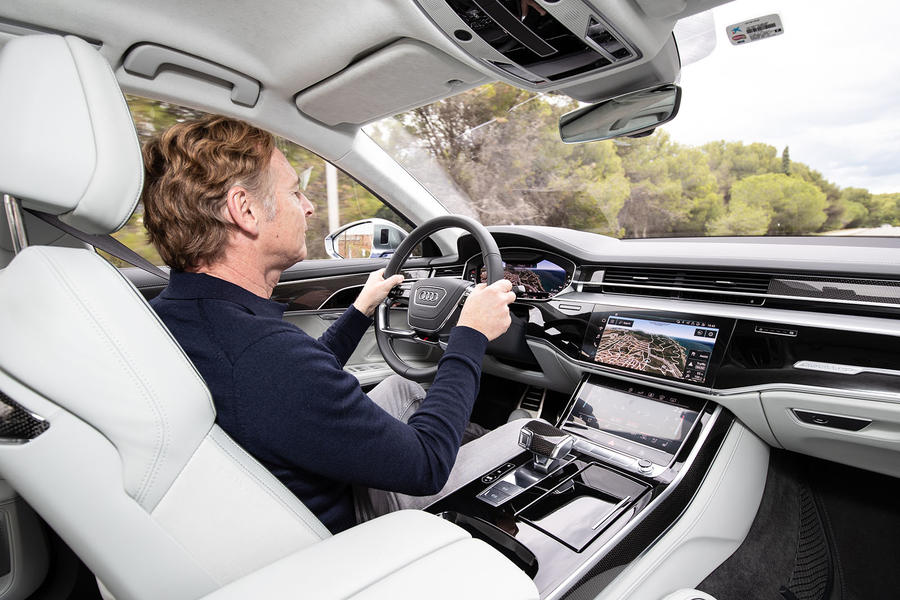