Drive is transmitted to all four wheels via an eight-speed automatic to four-wheel drive that can channel up to 80% of the torque to the back axle (40/60 front to rear is the default setting) and is equipped with an active torque vectoring limited slip differential.

Suspension modifications run to a wider track (10mm front and 5mm rear), revised damper rates for the adaptive air suspension and the option of a 48V anti-roll system that’ll be familiar to Porsche and Bentley owners. Our car was fitted with this kit alongside optional 23-inch alloys (21s are standard), although the 295mm width of the tyre is the same regardless of wheel diameter. There’s also four-wheel steering (standard on the flagship Vorsprung), which can turn the back wheels up to five degrees in the opposite direction to the fronts at low speed, and 1.5 degrees in the same direction above 37mph. 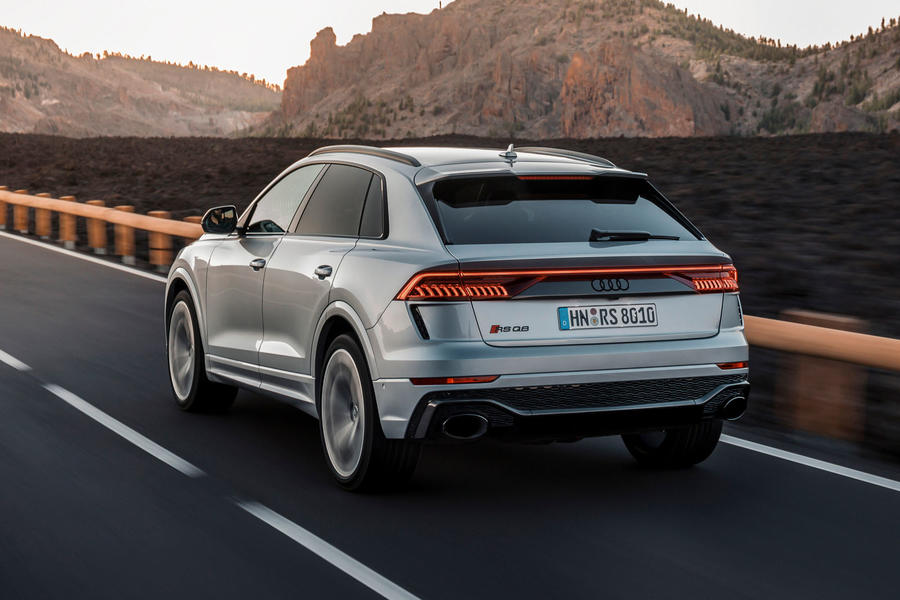 Arguably it’s the four-wheel steer that sets the tone for the RS Q8, its ability to quickly rotate the rear of the car to quell understeer helping deliver agility that simply shouldn’t be possible for a car of this size and weight.

Regardless of driver mode – there are a bewildering array of settings, some of which can be stored and saved for quick access via a steering wheel-mounted RS button – the steering is fairly mute. But the rack is quick and the weighting is reasuringly hefty, plus there’s plenty of turn-in bite, allowing to commit to the apex with real confidence. And with the rear steer getting you pointing staighter sooner, you can get on the throttle earlier and exploit the double whammy effect of that torque vectoring diff and four-wheel-drive traction. The anti-roll wizardry plays its part too, helping keep things on an even keel and under cast iron control. It’s not fun and engaging in the normal sense and you feel that the systems are doing a lot of the work, but it’s hard not to giggle a little at the vast RS Q8’s ability to deal with corners and changes of direction with near hot-hatch poise and agility. It doesn’t mess about on the bits in between, either.

Once the compressors are really boosting above 2000rpm the V8 fires the RS Q8 along with a deep-chested, relentless energy, while in Dynamic mode the twin exhaust’s subtle baritone is enhanced by some pops and bangs on the overrun. And while the optional carbon ceramic brakes suffer from a dead patch at the top the pedal travel when you’re pootling, work them hard and they deliver powerful, fade-free and easily modulated retardation. If there’s a criticism of the drivetrain, it’s that the eight-speed auto can slot home ratios a bit jerkily in its most aggressive mode.

Dial everything back and the RS is pretty much as easy to live with as a standard Q8, with the exception that even in its softest setting there’s an underlying firmness to the ride. The cabin is spacious and classy with the same wall-to-wall TFT screens, plus there’s room for five and a usefully large boot. Hell, it’ll even go off-road if you want, the air-suspension jacking the whole car up by 50mm for greater ground clearance. Towing horseboxes across muddy fields shouldn’t be a problem either.