In comparison, the GT-R needs some winding up, and in more ways than one. You need to acclimatise, because with all that mechanical clonking, gentle turbo whistle in the background and delicate but acute accelerator response, the car feels shot through with an authenticity that can be mildly intimidating even at sedate speeds. Also, the cabin is on the tight side and the Naca ducts in the bonnet bulge up into your field of vision, although as rivals have grown, the GT-R no longer seems to spread across its lane so thuggishly.

Only when you really begin to explore the performance – the car’s potential, and how much of it you might exploit between here and there – do you realise that the GT-R, even in its twilight years, can still draw you deeper into the driving experience than so many others, including this phenomenally effective AMG. Fail to read the road and it will hop and skip at times, and despite the point-and-squirt reputation, the combination of its long nose and rear torque bias means it’s only with a sense of excitement and trepidation that you begin to brake later and chase the throttle earlier. Then you start to find its groove. In this weather, it will slide freely, sometimes unexpectedly, and to get the most out of any GT-R you need to show respect and finesse, which you don’t always with the A45 S. This makes it an addictive car. 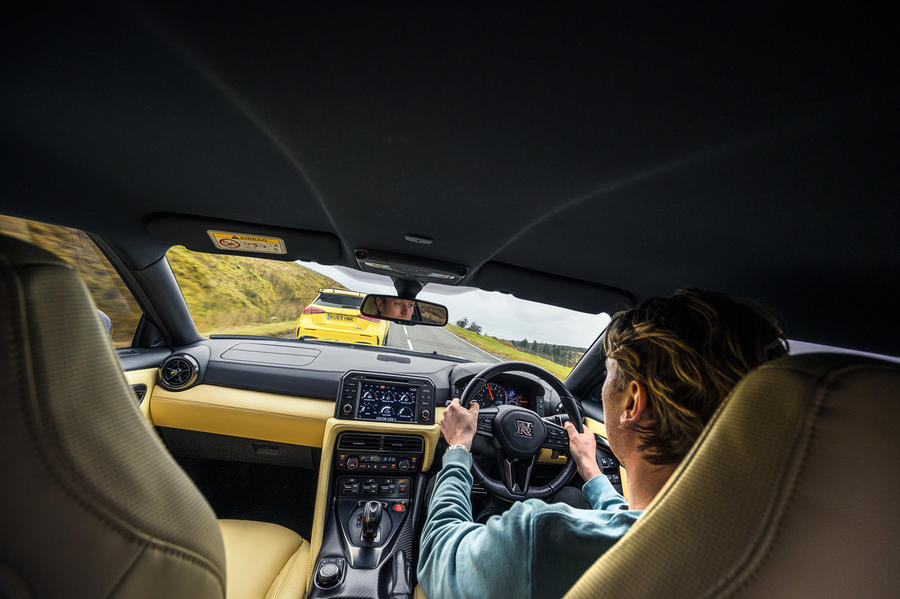 How likely is it that any committed GT-R shopper could be tempted to buy an A45 S instead? Bluntly, there’s next to no chance. As much as the performance continues to represent superb value for money, the Nissan’s heritage and aura are what give it almost inimitable appeal at this price, and its rawness is worn as a badge of honour. Inevitably, the hot hatch’s slick usability also undermines its sense of occasion, if only a little.

Those of a more open-minded disposition are strongly advised to drive the AMG. Plenty will scoff at the price, but you need to forget about traditional hot hatches and coldly consider what this one can do. The performance is simply extraordinary, and the fact it comes from an engine of only conventional displacement means the handling isn’t made nose-heavy by additional cylinders. This M139 unit is also smooth and linear (although not by any means immune to turbo lag), which is some achievement, given the stress it needs to withstand. The new gearbox is a touch slurpy in comparison with the best dual-clutchers, but it’s easily good enough, and the car also does surprisingly well in other core areas: driving position, pedal weighting and, let’s not forget, passenger space.

So please excuse the cop-out, but there really is no loser on this occasion – because both cars are exceptional in many ways, and because both manage it despite pariah status. The GT-R has to share its badge with all manner of soulless metal and the A45 S will always carry the baggage of being a hatchback, but they’re giant-slayers both. The GT-R’s spirit, the more unfiltered nature of its talent and the eventfulness of even a short drive ultimately give it the edge, but few A45 S owners will regret their choice. This latest AMG – a car more identifiably AMG than hot hatch – is clearly worth the money.