Most of the GP’s extra power is achieved with a new turbocharger. The motor’s compression ratio is reduced to cope with the extra boost pressure, and a new intake duct and new multi-hole injectors – with up to 350 bar of pressure – also feature, as does a GP-specific oil sump.

Power is put to the front wheels only through an eight-speed automatic gearbox with steering-wheel-mounted shift paddles. A mechanical differential lock helps to channel the healthy power output smoothly.

The GP’s body structure is said to be “extremely rigid” (though no percentage increase is quoted), with new supports, members and strut braces. The suspension was developed from extensive Nürburgring testing. The track widths are increased and the body is lowered by 10mm over the standard JCW, while a host of new parts and extra front camber reduce roll and improve grip. 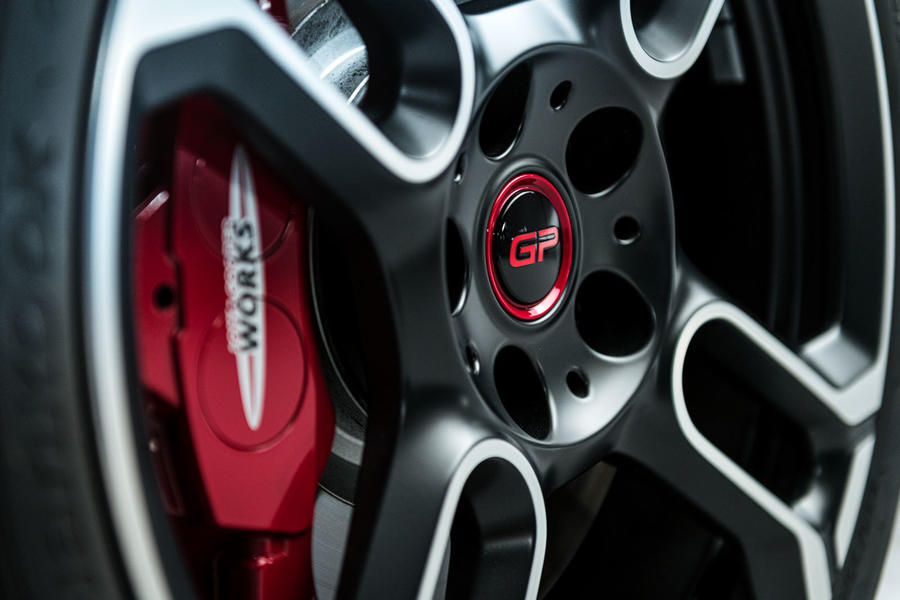 Inside, there are just two seats. Combined with less acoustic insulation, the shedding of its rear seats contributes to a reduced, 1255kg kerb weight – 85kg lighter than the normal JCW. New 3D-printed honeycomb metal shift paddles feature and 3D printing has also been used for the passenger dashboard panel, where the car’s build number is displayed.

Despite the pared-back approach, the GP can still be specced with sat-nav, wireless charging and heated front seats. It also gets the digital instrument cluster from the Mini Electric as standard.