Nevertheless, the hop down to Folkestone and across to Calais via the Eurotunnel is pleasingly painless. The Mini’s impressively supportive seats – upholstered here in attractive special-edition brown leather – do well to ward off any aches, while the seat heaters quickly neutralise the winter’s chill.

Gripes at this point are fairly limited, too. The firm-edged ride hasn’t proved problematic just yet, although I haven’t completely warmed to the seven-speed dual-clutch ’box. It can be a bit too slow on the uptake, hesitating when I’d prefer a snappy downshift for a swift passing manoeuvre. Given the choice, I’d have gone for the standard six-speed manual without thinking about it. But with practically all of the trip still ahead of us – and most of that being on potentially congested motorways and autobahns – I’m nonetheless grateful for the dual-clutch gearbox’s ease of use. As is my left leg.

Eventually, we clear the expansive, relatively dull farming plains of northern France and Belgium and are soon bearing down on the German border from the Netherlands. A quick driver change just before we cross into Germany puts Lacey at the wheel and gives me some much-needed rest, right in time for the skies to open and unleash one of the heaviest deluges I think I’ve ever seen. Thankfully, the Mini remains staunchly unflummoxed all the way to our hotel in Bremen, but the rain scuppers any attempt to make the most of the derestricted autobahns.

By the time we wake up to the cold, grey dawn of the second day of our trip, the rain has lifted. Save for a brief run-in with the Autobahnpolizei, this allows for swift progress to be made into Denmark. The Mini’s 2.0-litre four-pot proves powerful enough so as not to be grossly shown up on the autobahn and it doesn’t become too much of an earache when cruising at speeds of between 100mph and 130mph, either. 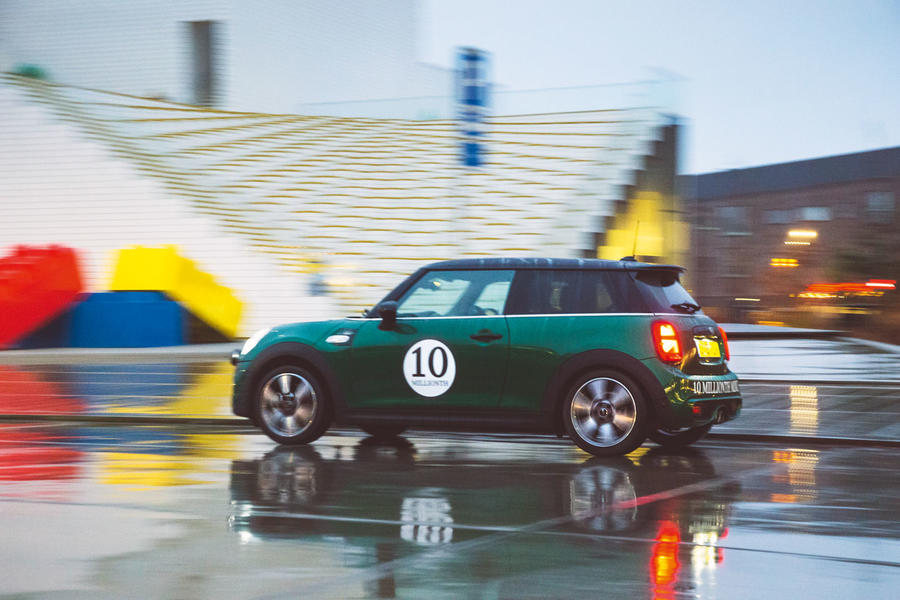 After roughly four hours on the road, we roll into Billund and arrive at Lego House. Despite turning up somewhat unannounced, the ever-charming Lacey manages to sweet-talk his way into parking the Mini on the pavement for a few snaps in front of the building and a chance encounter with Trine Nissen – the head of communications for Lego House – leads to a fascinating, and very entertaining, impromptu tour of this Mecca for all things small.

In addition to an impressive array of Lego-based constructions (the ‘Tree of Creativity’ is a highlight, being made of more than six million pieces and standing 15 metres tall), Nissen sheds light on how Lego came to be the global success it is today.

Unsurprisingly, the decision of founder Ole Kirk Christiansen to introduce interlocking plastic building bricks alongside the company’s existing line-up of wooden toys plays a key role. However, these original bricks were hollow, which limited their structural integrity and versatility. A solution was soon found, though, and as with all great designs that fix, it was a delightfully simple one: a series of reinforcing cylindrical tubes was added to the interior of every new brick. Lego patented the concept and the rest – as they say – is history. And with the photographs in the bag, so, too, is our time in Billund.