Externally there are the usual AMG calling cards, including multi-spoke 19in alloy wheels (20 and 21in options are available) and a bodykit that runs to a deeper front splitter, twin-exit exhausts set into a new rear bumper and a prominent tailgate spoiler. The GLB is also the first 35-series model to get the toothsome-looking ‘Panamericana’ AMG grille influenced by the firm’s 1950s racers.

There’s been a similar AMG makeover inside, where you get the latest three-spoke multi-function wheel, more supportive front seats and metal-finished pedals. Also included are the frankly bewildering AMG Dynamic Select driver modes, which deliver numerous combinations of separate throttle, gearbox, driveline, steering and stability control settings. It’s all too easy to disappear down the rabbit hole as you delve deeper and deeper into various sub-menus.

Elsewhere, the cabin is pretty much standard GLB, which means the same versatile, if a little cramped, seven-seat layout. Also familiar is the high standard of fit and finish, with only the scratchy plastics used lower down distracting from the car’s premium appeal. 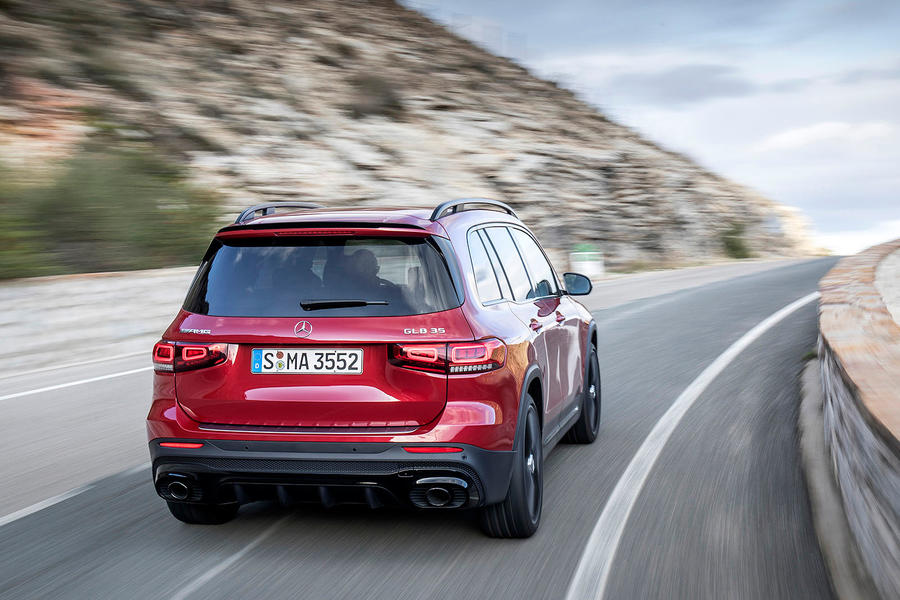 In simple terms, the Mercedes-AMG GLB 35 feels exactly like what it is: a heavier, higher and longer version of the A35. It’s fairly rapid in a straight line and (caveat alert) for an SUV it’s reasonably grippy and composed. It’s not a characterful or engaging machine as such, but the combination of raised driving position, muscular engine, four-wheel drive traction and (relatively) compact dimensions means you can make quick progress over give-and-take roads.

As in the A35, the 2.0-litre turbo engine is effective rather than exciting, its rich seam of torque meaning there’s no thrilling rush to the redline but rather a sense of relentless acceleration. And while its extra mass means it’s slower than the hatch, a 0-62mph time of 5.2sec is hardly shabby. It’s a smooth enough engine, too, while its muted growl and occasional burble from the exhausts on the overrun deliver just enough sporting intent. And the dual-clutch ’box fires home ratios quickly and slickly, responding to the steering wheel-mounted paddles with admirable crispness.

As you’d expect, traction is impressive, and on dry roads there isn’t even the merest chirrup of wheelspin. Slowing the GLB is equally confidence-inspiring, the brakes biting progressively and powerfully – although on hilly routes or a track there’s every chance the car’s mass would begin to tell.

Guide the GLB 35 through a series of corners and you sense there’s greater heft to the steering than in the standard GLB, even in Comfort mode, while body movements are more tightly controlled, both vertically and in roll. Grip is strong, while torque vectoring helps to keep the nose locked on your chosen trajectory and encourages the car to very subtly rotate into the corner. As a result, the GLB feels remarkably agile, even if it responds a tad more lazily, particularly through rapid changes of direction, than the A35.